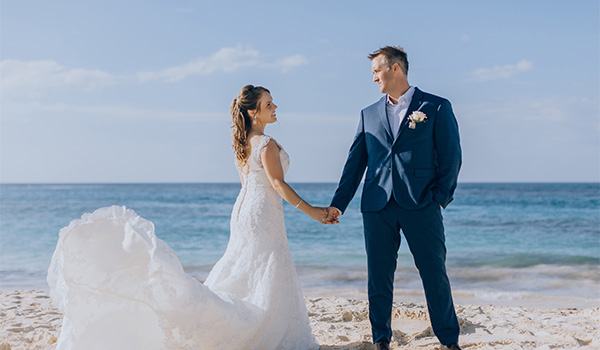 Photo: Junior Cruz from Tropical Studio
Where it all started

Karine, a program officer, and Steve, an optician, both grew up in the small northern Ontario town of Hearst. Even though the town has a population of just 5,000 and their families knew each other, Karine and Steve’s paths didn’t cross until 2012 when they started working for the same company. After spending time together at the office, Steve asked Karine out on a date where they got to know each other over take-out and wine.

After moving in together, Karine knew that Steve was the man she wanted to marry. In September of 2017, the couple – who both love the outdoors – went on a camping trip to Presqu’iles Provincial Park on Lake Ontario. Unfortunately, it rained most of the weekend but on Sunday night, the skies cleared up and a full moon appeared over the lake. Steve knew that it was the perfect moment to propose. After checking to make sure no one was on the beach, Steve brought Karine down to look at the moon and stars. As they gazed at the starry sky, he got down on his knees and popped the question. As Karine said yes and they kissed, people at a nearby campsite started clapping – they had seen the entire proposal! 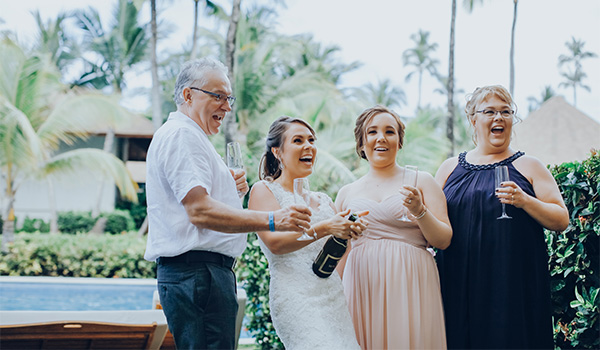 Karine and Steve both love to travel and spend time on the beach, so a destination wedding seemed like the perfect choice. They wanted an intimate and stress-free wedding where they could focus on spending quality time with their family and friends. After doing plenty of research, the couple decided on Punta Cana as their wedding destination because of its beautiful beaches and rave reviews from their family and friends.

Majestic Colonial Punta Cana offered an amazing wedding package that suited their needs and had a picturesque venue on the famous Bavaro Beach where they could say “I do”. Plus, they loved that the upscale resort was family-friendly and had features that all their guests could enjoy! 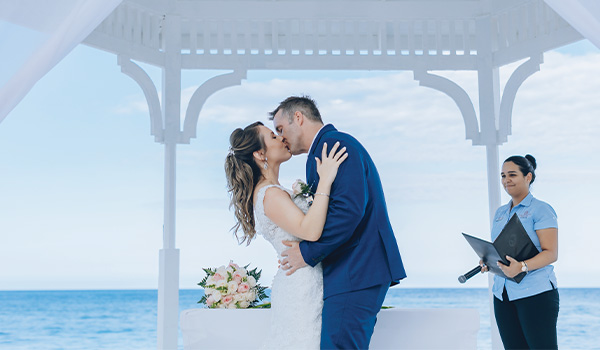 On March 28, 2019, Karine and Steve exchanged their vows beneath the beach gazebo at Majestic Colonial in front of 43 guests. The gazebo was decorated elegantly in ivory tulle, with the sparkling waters of the Caribbean Sea providing a breathtaking backdrop for their nuptials. Both Karine and Steve’s favourite moment of the day was when Karine walked down the aisle – Steve couldn’t remember seeing anyone else in the moment and Karine loved seeing her future husband at the other end of the aisle waiting for her.

After their beachfront ceremony, the couple hosted a glamorous reception at the poolside Wet Bar. The venue was decorated in their colour scheme of blush, navy and ivory and they shared plenty of laughs with their family and friends throughout the night. For their honeymoon, they embarked on a seven-day cruise across the Eastern Caribbean from Miami to Puerto Rico, the U.S. Virgin Islands, the Dominican Republic and The Bahamas. 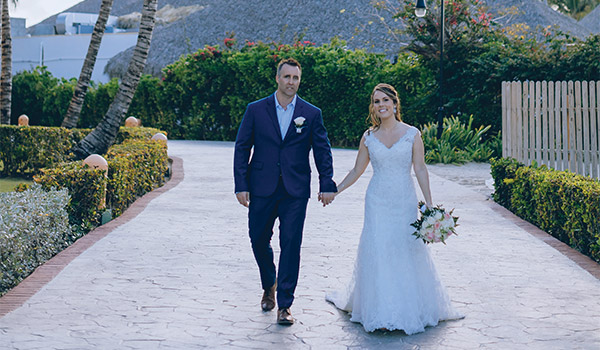 Steve’s attire: Suit from RW&CO and shoes from DSW

Steve’s accessories: Pendant of his late father clipped on his boutonniere 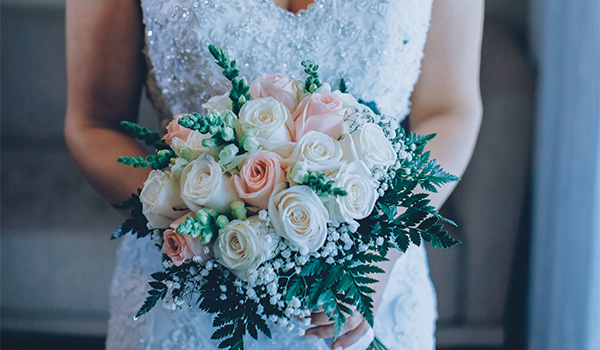 Hair and makeup: Half-up, half-down style with curls and natural makeup with a hint of glam

Traditions: The couple decided to ditch the traditions and keep everything simple to reflect their personal style. The only traditional element they incorporated in their big day was the father-daughter dance.

“Don’t stress; enjoy the day – your wedding coordinator has you covered! Your wedding day will pass by in the blink of an eye, so take the time to look around and take in the fact that all your family and friends made the journey to be there with you on your special day.”